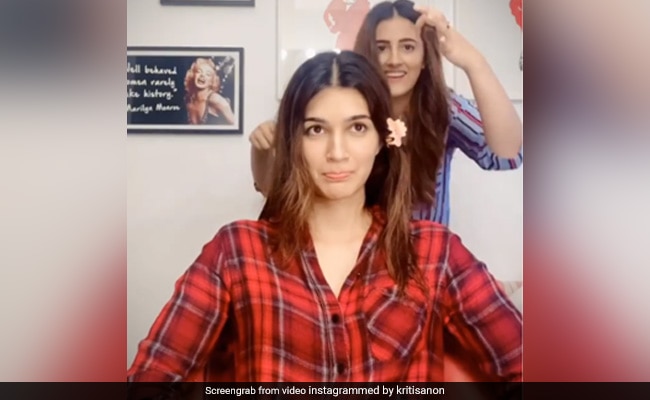 Kriti and Nupur in a still from the video. (Image courtesy: kritisanon)

Leave it to Kriti and Nupur Sanon to set sister goals for every occasion. The Sanon sisters, who usually post pictures from their envy-inducing vacations on Instagram, did something different this time. A few days ago, Kriti posted a video of Nupur giving her a haircut at home. In the video, Kriti’s expressions were just priceless. Let’s just say that Nupur did a brilliant job and the comments on Kriti’s post clearly reflect that. RJ Malishka wrote: “Lovely! Nupur has so many career options.” An Instagram user wrote: “The short hair looks so cute.” Another fan added, “Wow! Amazing.”

Sharing the video on Instagram, Kriti wrote: “Baal baal bach gaye… Watch it till the end to see for yourself! Have never ever gone this short and I love it. Thank you, Nupur Sanon for such a refreshing cut. You did scare me with your goofy wicked smile and the fact that you were constantly moving your booty on the Punjabi tracks while you had my precious tresses in your hand! #LockdownWithTheSanonSisters #TheSanonSisters.”

Check out the video here:

Sharing another picture of new hairdo, Kriti wrote: “Sometimes all you need is change. Summer hair.”

Kriti Sanon was last seen in the Ashutosh Gowariker-directed 2020 period drama Panipat, in which she played the role of Parvati Bai, the second wife of Sadashiv Rao. Kriti had a busy year in 2019 with films likeArjun Patiala, Housefull 4 and Luka Chuppi hitting the screens. Her next release is Laxman Utekar’s Mimi, a remake of the National Award winning 2011 Marathi film Mala Aai Vhhaychy!

Kriti Sanon made her Bollywood debut with the 2014 film Heropanti, co-starring Tiger Shroff. Kriti is best-known for her performances in films such as Bareilly Ki Barfi, Raabta and Dilwale among others.

Kriti’s sister Nupur Sanon is a singer, who made her acting debut opposite Akshay Kumar in B Praak’s music video, titled Filhall.

Jyothika, In Her “Second Innings,” On Why She Signed Ponmagal Vandhal

When Varun Dhawan And Kiara Advani Danced To Sun Saathiya