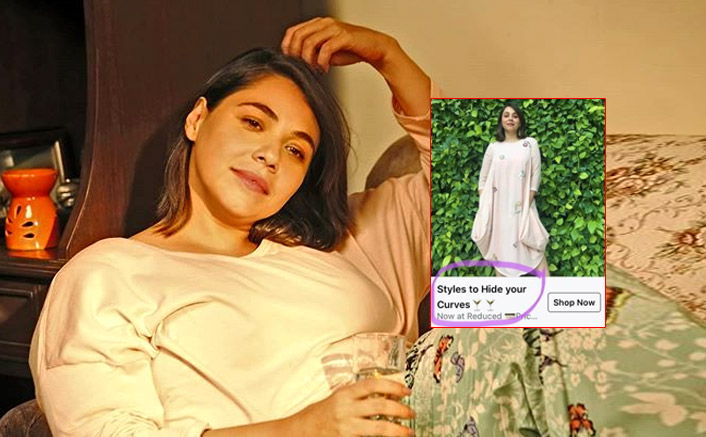 Maanvi Gagroo is best known for her roles in web series like TVF Tripling’s and Amazon Prime Video’s Four More Shots Please. The actress has recently made headlines after she called out a Delhi based fashion brand for casually fat-shaming her.

Taking to her official Twitter handle, Maanvi Gagroo shared a tweet with a screenshot of a Facebook post of Delhi based fashion label, House Of Fett. But what has caught our attention are the words “Styles to hide your curves” can be seen written below a photo of Maanvi wearing a flowy dress.

Now, while we too are shocked with this kind of fashion propaganda, the tagline has rubbed Maanvi in the wrong way. And rightly so! No one has the right to fat sham an individual and certainly not in just a casual manner. Sharing the screenshot on her official Twitter handle, Maanvi wrote, “I didn’t wear this dress to ‘hide my curves’. Not only does the brand NOT have my permission to use my picture as a sponsored post, they definitely don’t have my permission to fat shame ANYONE! I stand against everything this distasteful tagline points to.”

Maanvi Gagroo was last seen in Amazon Prime Video’s Four More Shots Please in which she played the character of a rich Gujarati girl, who is fat-shamed all her growing up years by her mother. But in the second season, she becomes more at peace with her body and evolves to become a more mature person.

Opening up about the concept of fat-shaming girls, Maanvi had been earlier quoted saying, “Our living room conversations are changing. Families are changing. We’re now talking about things that were, till even a decade ago, fairly uncommon, let alone being scandalous. The smart thing to do as creators is to represent this change. Why wouldn’t we show stories that are relatable and depict characters that exist? Narratives need to change with every story, perspective as well.”

Do let us know your thoughts on casual fat shaming.

Nushrat Bharucha To Lead The Hindi Remake Of Hit-Marathi Horror Film ‘Lapachhapi’, To Be Titled As ‘Chhori’