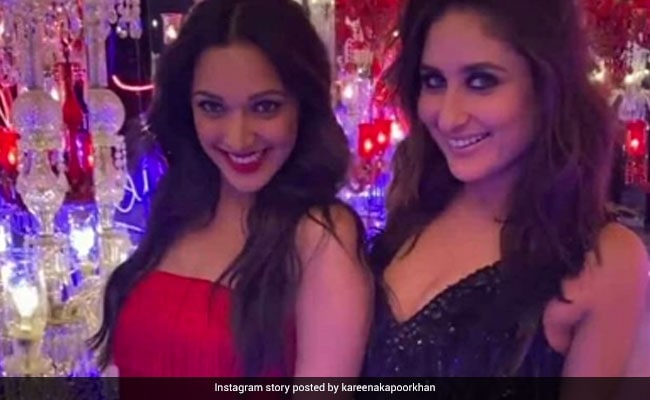 On Kiara Advani’s birthday, her Good Newwz co-star Kareena Kapoor shared a special wish for her on social media. Kiara Advani turned 29 on Friday. To make Kiara’s day extra special, Kareena posted a picture of themselves from the sets of their 2019 film. Kareena looks stunning in a black dress while Kiara Advani looks gorgeous in a red outfit in the photo. Sharing the BTS picture on her Instagram story, Kareena Kapoor wished Kiara like this: “Happy birthday, dear Kiara. May only good news come your way.” Good Newwz, directed by Raj Mehta, also starred Akshay Kumar and Diljit Dosanjh.

Kiara Advani made her debut in Bollywood with the 2014 film Fugly. However, her breakout film was 2016’s MS Dhoni: The Untold Story, in which she co-starred with late actor Sushant Singh Rajput. She has also featured in films like Bharat Ane Nenu, Vinaya Vidheya Rama and Machine, to name a few. She was last seen in Netflix’s Guilty. Kiara has several projects lined-up, including Laxmmi Bomb with Akshay Kumar, Bhool Bhulaiyaa 2 (opposite Kartik Aaryan) and Indoo Ki Jawani.

(Except for the headline, this story has not been edited by NDTV staff and is published from a syndicated feed.)

Mouni Roy Lights Up Instagram With Sun-Kissed Pics From London