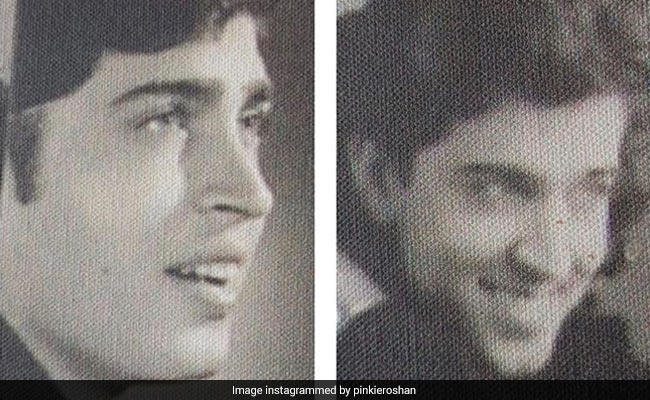 Is there anything like a throwback Tuesday? Because Hrithik Roshan’s mom Pinkie surely was in a throwback kind of a mood. She took a trip down memory lane and dug out not one but two throwbacks from the Roshans’ family archives to make a collage. The collage Instagrammed by Pinkie Roshan features a black and white photo of her husband Rakesh Roshan from when he was 21 and a monochrome picture of a 21-year-old Hrithik. “Both pics from when they were 21 #blackandwhite #fatherandson #meninmylife,” Pinkie Roshan captioned her post. The throwback post is proof that Hrithik, at 21, looked just like dad Rakesh Roshan from when he was younger. Pinkie Roshan’s post was flooded with comments, describing Hrithik as his father’s “carbon copy.”

Just five years after this photo of Hrithik was clicked, he stepped into Bollywood with Kaho Naa… Pyaar Hai, co-starring Ameesha Patel, and directed by his father Rakesh Roshan. On a TV show, Hrithik Roshan had revealed in September last year that he got over 30,000 wedding proposals after Kaho Naa… Pyaar Hai released in 2000. Hrithik was critically acclaimed for his performance in Mission Kashmir, also released that year. Hrithik also starred in Fiza in 2000, his second Bollywood film.

Wow . Overwhelmed looking at this . KNPH hadn’t released. Thanks for treating me so kindly on set @Jhajhajhahttps://t.co/oZrtEQJbp3

Apart from Koi… Mil Gaya, Hrithik was also directed by his filmmaker father in movies such as Krrish and Krrish 3. Hrithik Roshan’s upcoming film includes the next instalment in the Krrish series, to be also directed by Rakesh Roshan.

Ileana D’Cruz, In A Workout And Repeat Mode These Days, Shares Pic From Her Fitness Session

WandaVision & The Falcon and the Winter Soldier Release Dates Confirmed

Had so much fun composing ‘LOL’